Following the winter of 2013/14, officially declared the wettest since records began in 1910,  the UK has been struck by nationwide floods. Atlantic storms have battered the coastline, and the country's rivers have been full to bursting in both rural and urban areas following record rainfall.

River-dredging has been indicated as a key strategy in reducing the risk of flooding by increasing the capacity of rivers. However, more focus is now being placed on strategies to reduce the impact of urban development on drainage. The government has been pushing to implement rules for developers to improve drainage on new housing developments, including strategies to increase the permeability of ground surfaces.

The long-standing question of whom should pay for drainage facilities has now been settled, although the policy has yet to be implemented.

Councils will be responsible for the installation and maintenance of drainage facilities, and in some cases will be able to bill owners of new homes unless the developments comply with Sustainable Drainage System (SUDS) guidelines.

The Flood Act of 2010 requires new developments to allow water run-off from roofs and driveways to drain into open ground, rather than enter our Victorian drainage system which can easily become overwhelmed by sudden heavy rainfall. Urban drainage is an ever increasing problem, with open ground available for natural drainage giving way to impermeable ground surfaces such as asphalt and concrete.

The image below illustrates a strategy of permeable ground surfaces and drainage into open ground through ponds and wet basins. Car parks and driveways are an obvious application for permeable paving as indicated. 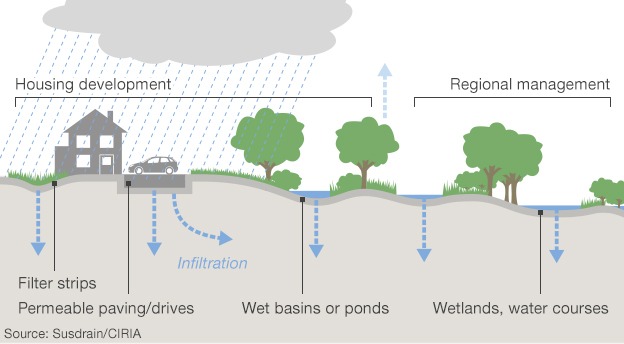 A Defra spokesman is quoted as saying: "SUDS are usually cheaper to maintain than conventional drainage, and we will be consulting soon on how they will be maintained by local authorities."

Mary Dhonau, of the Flood Protection Association, has said: "I think the solution has got to be a cocktail of lots of different things - the green roofs, the recycling of grey water for toilet flushing, permeable paving, Sustainable Urban Drainage - a little bit of a lot to reduce flood risk. I have concerns that if this cocktail of flood reduction measures isn't adopted, people downstream from new developments, that haven't been flooded before, may well find themselves flooding in the future."

Green roofs have also been suggested as a way to reduce the impact of sudden heavy rainfall on our Victorian drains. Green roofs have been shown on average to retain 82% of rainfall, compared to just 27% in gravel roofs.

Furthermore, these grids are excellent for allowing green roofs to establish. They are conformable to practically any roof shape.

The plastic paving grids are set to replace traditional concrete paving grids, which were many times heavier and hence more difficult to transport and install, would often break during transport or installation, and offered less permeability than their plastic counterparts. £32.00
All best sellers
You need to login or create account

Save products on your wishlist to buy them later or share with your friends.